Helest, familiar
A black horse, whose crest and hoofs sprout a blue, cold flame
working on it…

- Imprison elemental spell: Rego base 5, +1 touch, +1 Conc = 15 (lvl 20 for voice range)
The goal being to have this maintained by the ring. Possibly forever.
Question: must the ring be bound to the elemental, or can it be stored someplace? Anyway, this allows for bound elemental servants. I’d say that, since the maintained spell must remain “inside” the ring, it must remain with the elemental.
Note also that Isen can already do this with his Talisman but, due to the flickering, this is useless: an elemental would be releases at sunrise/sunset, since the maintain spell would fail to keep the Rego spell up.

At worst, a rego control spell and a ring inlaid in the ground (with a Maintain spell) can be used to contain indefinitely an elemental until it is needed.

- For the wall of ME:
an InTe spell that ascertain the wall’s state. Base 2, +1 touch, unlimited uses, magnitudes for size => probably lvl 15 +10 unlimited uses
Linked to a CrAq Ice spell, that creates a gigantic Ice Wall around the covenant for Sun duration. probably lvl 40, 1 use per day. 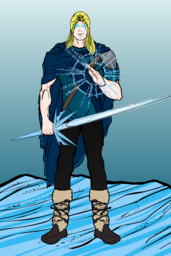